In 1994, author Greg Shapiro came to the Netherlands. The idea was to spend a while doing comedy for a start-up theater called Boom Chicago, but he stayed for love. That was the start of a cultural adventure, with incidents and elements that anyone who spends some time in the Netherlands is bound to recognize. Covering topics that range from places he lived in – and what each of these places taught him about the Dutch – to the social issues such as Zwarte Piet, Dutch meetings, trying to make sense in Dutch, and Bike Etiquette, The American Netherlander is just too much fun to put down.

Try to picture some the scenes he recreates, such as the births of his children and his introduction to the ‘mother cookie’ and ‘shame hair’, or having to answer his doctor’s questions regarding what he thinks is the matter and how to treat it. Not to mention convincing a service team – “When service and team appear in the same sentence, it usually means trouble” – to install a washing machine. Written with a wry sense of humor and an eye for detail and the ludicrous, he manages to paint a picture of a nation that is part cartoon, part realism. At each turn of the page, you find yourself both laughing about and appreciating the Dutch.

And then, once you have seen the Dutch through Greg Shapiro’s eyes, you are treated to that very special aspect of deciding to live in the country; the Dutch Assimilation Test – one that the Dutch themselves score notoriously badly on. “Every question tells a story,” Shapiro explains, proceeding to explain what characteristically Dutch assumptions lie at the basis of these questions and why they want you to give a particular answer. Under the title, “The Questions That Should Be on the Actual Quiz,” readers are treated to what Shapiro feels would be a more useful and certainly entertaining way of familiarizing yourself with Dutch culture – and traveling the road towards assimilation.

The American Netherlander is accompanied by entertaining cartoons by illustrator Floor de Goede and photographs by the author. 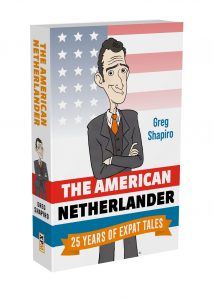