In the Netherlands, the Christmas season is marked by a sequence of typical Dutch festivities. Enjoyed by both children and adults, these events are a great way for expats to enjoy and learn more about Dutch culture. Some traditions, however, have considerable controversy attached to them. We will not only walk you through the lighthearted elements of the yuletide months in the Netherlands. On this page you can learn about both sides of the argument over ‘zwarte piet’ as well.

There is no festivity more quintessentially Dutch than ‘Sinterklaas’! Here is the story:

The Arrival of Sinterklaas in NL

In mid-November, Sinterklaas makes his official entry into the Netherlands. This is a big event in Holland! Here is what happens:

Sinterklaas for Grownups in NL

Sinterklaas is not only a holiday for children. Grown-ups like to participate in the fun too:

Traditionally, ‘Zwarte Piet’ is Sinterklaas’s helper. Whilst he is popular with children, he is a very controversial character as well:

The Zwarte Piet Debate in NL

How to Settle the Controversy?

The traditional answer to any discussion of this nature in the Netherlands is, of course… compromise! However, because the topic is so delicate, reaching a peaceful agreement has proved challenging:

In the fall of 2014, it looked as if a final answer had been settled upon:

It remains unclear how this is all to end. Only one thing is certain:

Unlike in many other countries, Sinterklaas could be considered a bigger festive event than Christmas day and New Years Eve in NL: 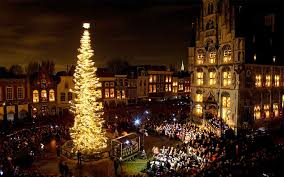 May 4: Dodenherdenking (Commemoration of the Dead)