The Dutch love to mark a special occasion. What’s more, for each one, they have a uniquely ‘Dutch way’ of celebrating. For expats, it can be great fun to learn about and partake in these cultural traditions. However, it is important to know a bit about them too. There are some very specific forms of etiquette in the Netherlands, and you risk offending your Dutch neighbors if you do not adhere to them. To find out what’s expected of you, look no further. We will take you through some common special occasions, and explain how the Dutch like them done!

The Dutch word for Birthday is: ‘verjaardag’ . In the Netherlands, nearly everyone celebrates their birthday with great enthusiasm. The festivities surrounding this special occasion usually go something like this:

The Dutch have a special way of remembering Birthdays: Birthday calendars. They are very popular in the Netherlands:

One very unique Dutch custom is that of ‘congratulating’. You must not only ‘congratulate’ the person having their birthday, but his or her relatives, friends and even neighbors as well!

Strangely enough, a Church ceremony alone does not constitute a legal marriage in Holland. Take a look at our page on: Getting Married in the Netherlands, to learn more about this. For now, here’s a summary of what a wedding tends to look like in NL:

Occasionally, the Dutch will succumb to the temptation to celebrate a wedding anniversary, with a large group of friends and family. However, marking this special occasion is not a set-in-stone tradition in the Netherlands:

How the Dutch celebrate Births

That pink or blue balloon-decked stork in your neighbors’ garden means that a new baby boy or girl has arrived! Here is the protocol: 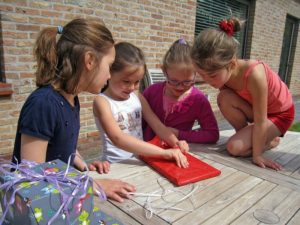 In the Netherlands, people routinely give one another gifts. There is a Dutch way of doing this too: 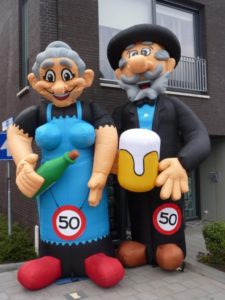 A 50th birthday is a special occasion that the Dutch really love to commemorate. What’s more, they have a very unique way of honoring this milestone!

There is a Dutch decorum when someone passes away in the Netherlands too: